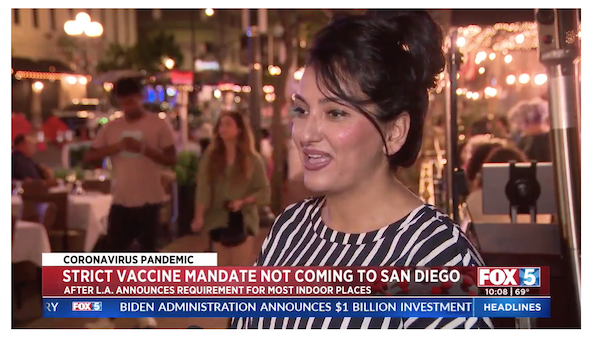 SAN DIEGO – Some San Diegans are questioning if COVID-19 vaccine mandates could become even more widespread after Los Angeles leaders Wednesday approved one of the nation’s strictest mandates for a range of indoor spaces.

But according to local leaders, it’s not something currently being considered.

“Every region’s got to do what they think is appropriate,” San Diego County Board of Supervisors Chair Nathan Fletcher said. “I don’t think at this time it’s something we need to do in San Diego County. Our cases are coming down. Our vaccine rates are really high. You know, our businesses are working to recover.

“They’re having staffing issues and I just don’t know it’s a burden we need to place on them.”

Los Angeles City Council approved the new mandate requiring people to be fully vaccinated to enter indoor spaces such as malls, restaurants, sports arenas, bars and gyms, among other locations. The ordinance, signed into law by Mayor Eric Garcetti, comes amid a push to reduce the risk of new surges in California’s most populous city, the Associated Press reported.

Under the ordinance, people would need to require proof of full vaccination by Nov. 4 with negative coronavirus tests within 72 hours required for those with religious or medical exemptions.

No such mandate exists in San Diego County, though in recent weeks some local municipalities and various employers have instituted vaccine and/or testing requirements. The latest came Tuesday night when the Board of Supervisors narrowly approved a requirement for new county employees to show proof they’ve been vaccinated against COVID-19.

As of Wednesday, more than 2.23 million county residents – or about 79.4% of the eligible population – are fully vaccinated with nearly 89% of those eligible having received at least one dose.

Although circumstances could change in the future, Fletcher said the county “need(s) to keep doing the things we’re doing.” Similar to Fletcher, Supervisor Jim Desmond said he’s not in support of instituting an indoor vaccine mandate like Los Angeles, arguing local businesses already have been through the wringer.

“Two or three times open and close, open and close,” Desmond said, “and now their business is going to be hampered by people not being to go out … especially those who are not vaccinated. I don’t see that happening anytime soon in San Diego County.”

That’s a positive sign for some business owners, such as Sara Arjmand with Greystone Prime Steakhouse & Seafood. She said a similar mandate might cause sales to drop by up to 40%.

“There’s a lot of monitoring that we have to abide by, you know,” Arjmand said. “As of right now, we just lost our tent last week. Now the fire department came and tore our outdoor patio out and now the staffing position and we just don’t want another mandate we have to stay on top of.”